A scrapbook showing how Florence Nightingale became a cultural phenomenon is going on display online in time for the 200th anniversary of the birth of the pioneer of modern nursing.

The Derbyshire-born nurse’s work during the Crimean War revolutionised hospital sanitisation, and she led the way in collecting and displaying data to show the impact of care. Her influence can still be felt today, especially as the world tackles Covid-19.

But in her time she was also extremely famous as an icon of popular culture, as shown by the scrapbook, part of the collection at Derby’s Local Studies and Family History Library. A digitised version was due to go on display at the library, but following the closure of the building because of the pandemic, it is being made available online. It can be viewed at www.derby.gov.uk/derbyshistory from May 12, the bicentenary of Miss Nightingale’s birth in 1820.

It is complemented by a specially-recorded online talk by Sunday Times bestselling author Katharine McMahon, who has a lifelong interest in Florence Nightingale.

The scrapbook was compiled by Llewellyn Jewitt, a local ‘antiquarian’ (historian) and a contemporary of Florence Nightingale. Originally from Plymouth, he settled in Derby and was one of the founders of Derbyshire Archaeological Society. He also led the local Nightingale Fund, raising money for her efforts in the Crimean War.

The document consists mainly of newspaper cuttings from 1853 – 1854, detailing Florence Nightingale’s progress in the Crimean War. But there are also poems, musical scores with song lyrics about her, and even a poster advertising a ship called the Florence Nightingale. Copies of engravings from London Illustrated and other broadsheets depict her in an idealised and often sentimental way.

One newspaper cutting mentions Mary Seacole, a Jamaican nurse who also helped develop our modern idea of nursing in the Crimean War, but whose work has not been recognised until relatively recently.

Mark Young from Derby’s Local Studies and Family History Library said: “A turning point for Florence was when she realised that more soldiers were dying from disease than from their war wounds, and it drove her to find different ways of doing things to save more lives, like designing the Nightingale Ward.

“Her story is very interesting and there are lots of layers to it. This scrapbook covers a small part of that story, but it illustrates very clearly how she was portrayed in popular culture at the time. She was a phenomenon.”

Author Katharine McMahon’s talk will be available to view online from May 12 at www.inderby.org.uk/libraries/news/Florence-Nightingale-Bicentennial-Talk/.  A special new edition of her novel The Rose of Sebastopol, a fictional account of a nurse serving in the Crimea alongside Florence Nightingale, has been published by W&N in time for the bicentenary. 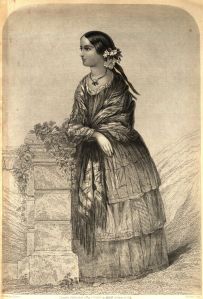 Katharine McMahon said: “This scrapbook is a gem and brings Nightingale, and the extraordinary publicity that followed her expedition to the Crimea, vividly to life. The cuttings and pictures show how she became a cult – in songs, plays and newspapers – but also the tragedy of disease and suffering that the real Florence tackled with unbounded energy and determination.”

Councillor Robin Wood, Derby City Council’s Cabinet Member for Culture, Leisure and Tourism said: “It is 200 years since Florence Nightingale was born and we are feeling the impact of her work now more than ever. However seeing her through the eyes of her contemporaries is absolutely fascinating and I am thrilled that we have been able to make this scrapbook available to view online, with an accompanying talk from a respected author to give some historical context.”