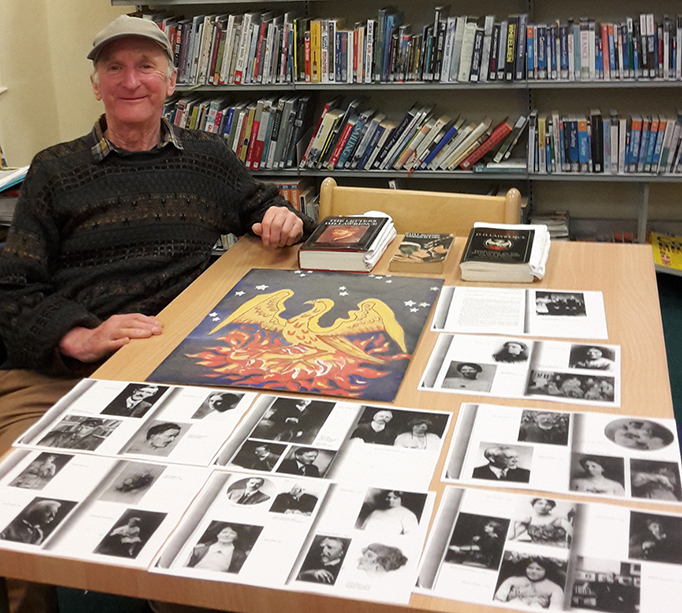 Nobody would dispute that David Brock is a fan of D H Lawrence. He has read most of the writer and poet’s collected works, can quote him extensively and raises awareness of his literary heritage at every given opportunity.

It is therefore no surprise that he has set up a group specifically to celebrate all things Lawrence and is looking for others to join him in his quest.

The Lawrence Players meet twice a month at Chapel-en-le-Frith library where they recite, discuss and analyse the writer’s plays and poetry as well as his many letters, short stories and novels.

“The Lawrence Players have much to do. Much to achieve. These are still early days. We are ambitious,” says David.

“Our first newsletter should be available soon and later this year we are hoping to have one or two guest speakers. As well as holding our regular study and performance sessions, we hope to get out and about with some Lawrence walks, where we recite his poetry and other works.

“We would like to visit Eastwood and its environs, where he was born, and maybe perform at the Lawrence Festival there.

“We might even read his work aloud on a Ripley Rattler Tram on his birthday.”

He said the group was looking for enthusiasts who enjoy performing to join so they could work towards staging one of Lawrence’s plays in future.

“I came out blinking into the sunshine having had a baptism of fire. I knew then that Lawrence was the greatest writer of all time. I took myself off to a caravan in Anglesey and read everything by him that I could and I have never looked back,” said David.

The enthusiast and, it has to be said, Lawrence expert, says that although the writer is known for his Nottinghamshire roots he did once live in Derbyshire at Mountain Cottage in Middleton-by-Wirksworth.

“He based many stories in Derbyshire, such as The Virgin and the Gipsy or Wintry Peacock. And he makes many, many references to Derbyshire locations throughout his work. There is a strong connection between him and the county,” David explained.

“As Lawrence’s wife Frieda wrote, after his death, he has in his work made humanity ‘a heroic and immeasurable gift’. Yet, the young in particular know nothing of him. They are being robbed of their great literary heritage. Which is an injustice I would like to help change.

“The Lawrence Players have brought Lawrence’s name and his reputation back into circulation locally. But more must be done.”

The Lawrence Players meet the first and third Thursdays of the month between 5pm and 7pm at Chapel-en-le-Frith Library. For more details contact David at vegan.lawrentian@gmail.com