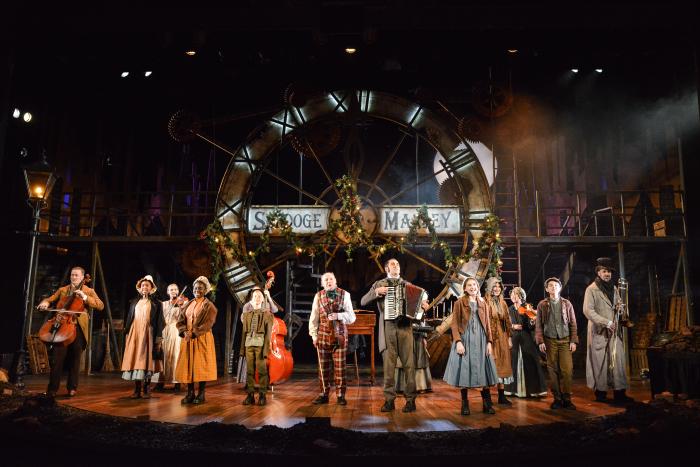 It’s a tale we all know well, but Derby Theatre has triumphantly infused Dickens’ A Christmas Carol with fresh life to create a visual and enthralling show which will leave audiences spellbound.

It is an ageless moral tale with lessons of charity and goodwill that sadly still resonate today. Dickens’ concern for the Victorian class divide is still as relevant as it was in his time.

Neil Duffield’s adaptation of the play was first staged at Derby, directed by Sarah Brigham, in 2014 and I thought it would be hard to improve on it. However this year’s director Oliver O’Shea has managed to do just that.

The team has polished the story’s social conscience to bring us a tale of redemption which packs an emotional thwack. I can’t have been the only one shedding a few tears as the show made a pointed case for the benefits of redistributing your personal wealth.

That’s not to say this is a production of doom and gloom. There is plenty to delight and hopefully you will leave the theatre with a feeling of joy and optimism for the warmth of human kindness.

He cares for nothing but his money and refuses to show an ounce of compassion to his fellow man.

But that’s all set to change, when he is visited by ghosts from the past, present and future.

Gareth Williams, playing the skinflint Scrooge, hooks us all in with a magnetic performance from the start, and the rest of the cast and The Young Company ensure that this version of A Christmas Carol was a perfectly executed piece of theatre.

The spectacular set with its giant clock with a backdrop of Victorian streetscapes has the same wow factor I remember from the original production and the integration of more festive music from the extremely talented ensemble adds to the festive atmosphere.

Take your family to see this show if you want to remind them that Christmas cheer and goodwill is much deeper than the imagined world of the television adverts.

A Christmas Carol can be seen at Derby Theatre until January 4, for tickets go to http://www.derbytheatre.co.uk