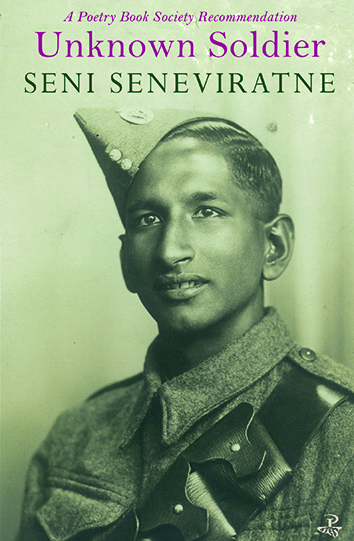 Poet and performer Seni Seneviratne, who describes herself as a passionately anti-war, has spent the past few years exploring the experiences of her much-loved father during his years fighting as one of ‘Monty’s Boys’ in the North African desert.

After his death she inherited an album of black and white photographs recording a friendship between two signalmen in an army camp in 1941.

The subject of the photographs was her father, a 24-year-old Ceylonese telephone and telegraph fitter who enlisted in the Royal Signals in 1940. The second soldier was the photographer.

Through the photographs she finds the voices of the two men and thus begins her journey to meet her father, the first soldier, the unknown soldier.

“I regretted I never had the conversations I should have had with him, and think that he was trying to protect me from knowing what happened.

“When I found the album I was intrigued and thought it would be a new way of having a different kind of relationship with my father,” explains Seni at her home in Wirksworth.

“I thought it was going to be a pamphlet when I began but it just came to life as I wrote.”

The collection begins and ends in an imaginative recreation of the life suggested in those photographs, many reproduced in the collection which has just been published and was officially launched during the Wirksworth Festival.

Speaking in both in the voice of the father and of the unknown photographer, poems explore the mix of male camaraderie and casual racism of that experience, but also the deep affection hinted at in the way the photographer has framed ‘Snowball’ in his lens.

From this imaginative core Seni’s poems also move out to reflect on more personal memories of her father and the life he had as a migrant from Ceylon, now Sri Lanka making a home and life for himself in Yorkshire.

Seni was born and raised in Leeds, and is of English and Sri Lankan heritage.

Her work as a poet and live artist has been praised particularly for the unique talent of engaging an audience through poetry and song. Seni’s first collection, Wild Cinnamon and Winter Skin published in 2007, offered a poetic landscape echoing themes of migration, family, love and loss and reflecting her personal journey as a woman of mixed heritage.

“I was in my teens when I first started writing for myself and it was in the 1980s that I first had something published but it was some years before I considered myself a poet. The shift happened when I took some time out to work and I started talking about myself as a writer.

“Wild Cinnamon and Winter Skin was 20-odd years of work pulled together.”

Her second collection The Heart of It followed in 2012, and now she is proudly promoting Unknown Soldier.

It was initially launched at the Wirksworth Festival and will have another launch in Sheffield at the Off the Shelf Literature Festival on October 19.

For more details go to http://www.seniseneviratne.com