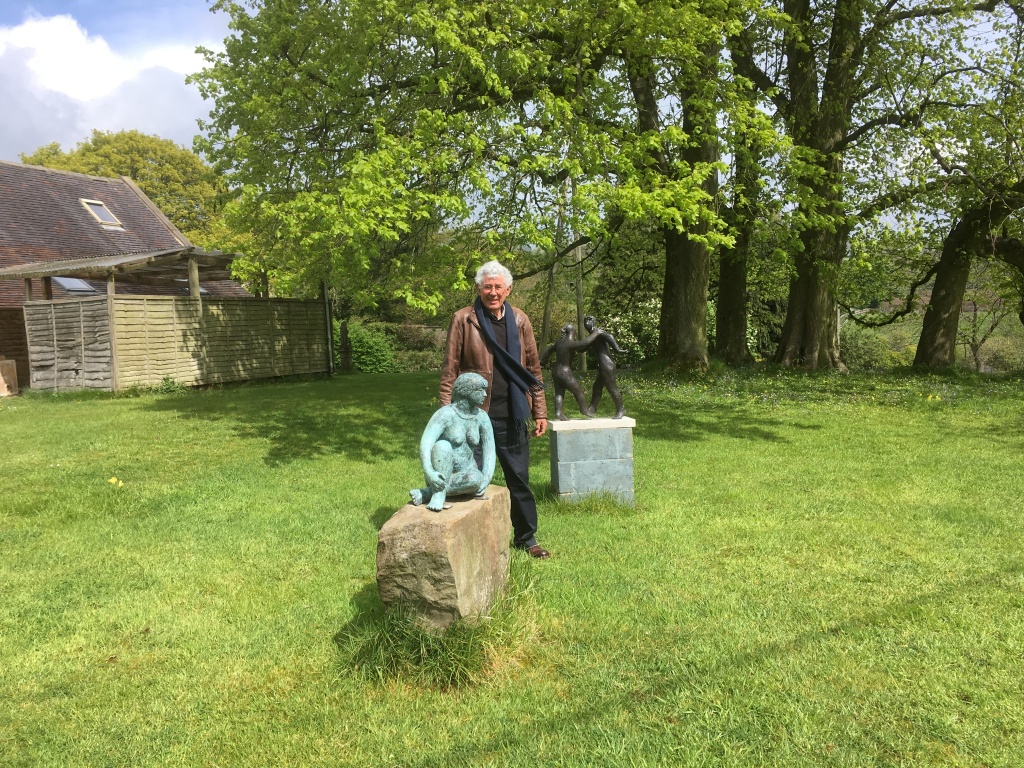 It might not be easy to find Wootton near Ashbourne without a good map or satellite navigation, but once there it is quite easy to find Forge Farm Studio – you just have to look for the collection of sculptures being exhibited in the garden.

The studio is at the home of artists Simon Manby and his wife Lee Mackay. They moved to the farm with a large plot of land and a scattering of outbuildings more than 50 years ago and have been working side by side, Simon as a sculptor and printmaker and Lee a painter, for almost as long.

They have both found success in their chosen medium and have exhibited across the UK as well as in France. But being an active part of their rural community is also important to the couple. So Simon was thrilled to be invited once again to exhibit his work at this year’s Ashbourne Festival.

“It was an honour to be invited to take part and I will be taking some work with a specific link to the town and to the Shrovetide Football,” said the 76-year-old artist.

Simon was born into a creative family. His father was an architect and his mother Judith Da Fano was a distinguished Lakeland artist. He says with a certain pride that his maternal grandmother Dorothea Landau was also a painter and sculptor and that she knew Auguste Rodin.

“In our home art was constantly discussed and their passion for it meant they encouraged me to look at and appreciate paintings and sculptures in beautiful churches, museums, ancient cathedrals and towns wherever we travelled.

“There were many friends and acquaintances that I met and all of that will have had an influence on me. I remember one occasion when I was no more than three or four when my mother took me to visit the studio of a sculptor. I was just knee-high to a modelling stand but as the two women spoke I looked about and inhaled the odours of the clay and boards.

“Many years later when I was looking around the sculpture studios at the Edinburgh College of Art the smell triggered that infant experience and I think it subconsciously drew me to them. I went to the college thinking I would be a painter but at that moment I chose to do sculpture.”

After college in 1967 Simon moved to the Midlands with Lee, whom he had met as a student, to start a five-year spell as a lecturer at Stoke College of Art.

“I took the job more out of the need to earn money than anything else. It wasn’t for me though, and one day I thought I either resign now or I will never do it. I went home and told Lee I had given my job up and she just said ‘Terrific it was making you miserable’.

“I was only 30 and had plenty of energy in those days. We set about converting the cowshed into a studio. We haven’t really looked back since,” he said looking fondly around the gallery space which he says has changed little since.

What has changed though is Simon’s work. It has evolved from work in wood to stone and now clay cast in bronze.

“In the early years I enjoyed carving in wood but it was very slow. Stone I found could be worked much more rapidly and I enjoyed the challenge it presented but eventually, what must be almost 30 years ago now, I started to get impatient with it and it was physically tiring me. It was then that I started making pieces directly from clay for casting in bronze.

“The change of medium has inspired fresh creativity in me. It had a liberating effect, freeing the sculpture from the gravity-bound density of stone,” he explained.

His figurative subject matter however continues to be inspired by the intimacies of human emotional relationships – a woman cradling a child; old men playing boule; a dancer or a couple in an embrace.

“My own life has been blessed and I have never suffered, but I have the impression that the world is full of pain and unhappiness and I want to reflect that in my art. At the same time I feel I have an obligation to be positive.

“I want to show this ambivalence so while underlying my work there is a kind of sadness it also says there is also beauty, grace, and delight in life, let’s celebrate it.”

Simon’s work will be on display at Ashbourne Town Hall Ballroom from June 22-29 as part of the Festival’s Annual Summer Exhibition. Artists exhibiting alongside him include Ross Danby, Heather Duncan, Martin Hyde, Lewis Noble, Graeme Reed and The Clayrooms

You can see more of Simon’s work at http://www.simonmanby.com