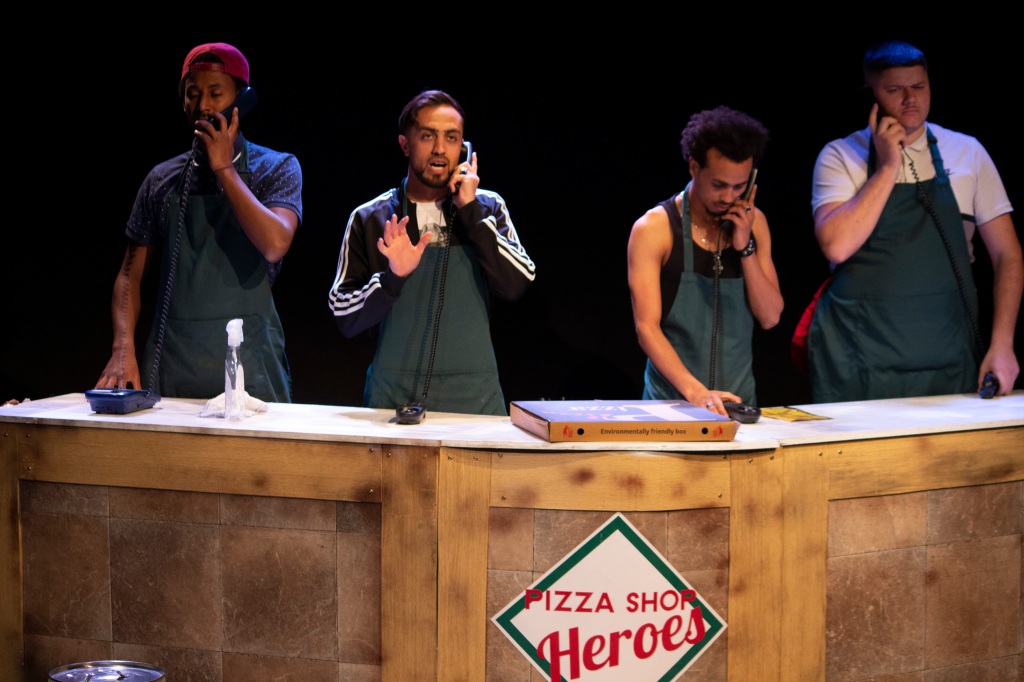 Before the four refugee actors in Pizza Shop Heroes began telling their stories the house rules were light-heartedly read to the audience at Derby Theatre Studio.

There were the usual reminders about phones and not eating noisily but added to the list for this show was a request not to feel sorry for the young men.

“We are not here  to warm or break hearts,” says the show’s artistic director Dawn Harrison. She has explained that the aim of the production is to offer a counter narrative to the dominant stereotypes of refugees as either victims or criminals.

The powerful show certainly abolished any notions of victimhood and instead championed four authoritative, witty men who clearly have the determination to make the most of their lives.

Using their own lived-experiences Tewodros Aregawe, Goitom Fesshaye, Syed Haleem Najibi and Emirjon Hoxhaj took us on a continent-crossing journey from when they left their homelands of Eritrea, Albania and Afghanistan as asylum seeking children.

They presented a lyrical collage of memories, hopes and dreams about how the got here, what they have learnt and where they are going.

Sharing the stage with them is Kate Duffy, a former refugee caseworker, who with her mother Dawn created Phosphoros Theatre so that the extraordinary stories could be told by the refugees themselves.

While the tales from detention camps in Libya and Greece were harrowing, it was the hostile environment they were met with once they made it to the UK, that was somehow more shocking.

But this was a fast-paced show and they didn’t dwell on any one aspect for long. If the audience was in any danger of feeling sorry for them the foursome soon had us laughing by reminding us how ludicrous some of own customs appear to those not brought up with them.

Phosphoros Theatre wants to bring the unseen to light and Pizza Shop Heroes will definitely open your eyes to the realities of being a refugee.

The show is now touring around the UK and will be at Nottingham Playhouse on June 8 and 19 and at Manchester in October. Go to http://www.phosphorostheatre.com for ticket details.