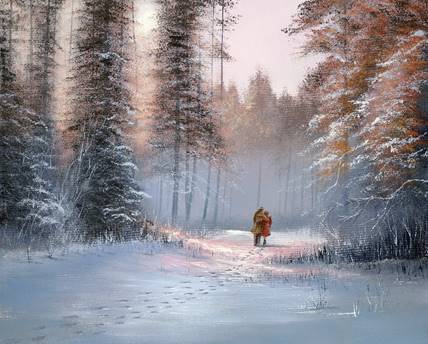 A selection of works by critically acclaimed artist, Jeff Rowland is on display at Castle Fine Art in Intu Derby until March 11.

Inspired by the genre of film and “the implicit meaning found in cinematic scenes”, Jeff’s work has become synonymous with themes of romance and 1950s film noir. Each of his intricate oil paintings invites the viewer into the picture, allowing them to build their own narrative around the characters.

The inclusion of falling rain in Jeff’s work is his signature feature – he creates this trademark effect by running his brush down the canvas using only the weight of the brush with the split hairs allowing strokes to become rain.

Originating from the North East of England, Jeff became self employed as a professional artist after studying art at college. After many years as a struggling artist – at one point having to retrain in advertising and illustration – Jeff’s path to success was cemented when he exhibited at a number of sell out art shows. He was subsequently signed to  fine art publisher, Washington Green Fine Art.

Jeff said: ‘My work is influenced by several things. The first of course is the rain, which  has become such a strong feature in my work that I feel it will always be there. Then there is my love of the old British black and white cinema.

“I have always tried to portray my work as a piece of cinema, maybe the end or high point of a movie, and I have always wanted my audience to form their own opinion of what was happening to the central characters in my paintings.’’

Matt King, gallery manager at Castle Fine Art, Derby, said: ‘’Time and time again, Jeff’s work has proven to be extremely popular with our customers because of the story it tells and the way it draws the viewer in.

“Jeff’s paintings really needs to be viewed in person to be fully appreciated, so we look forward to welcoming visitors to the exhibition to experience it for themselves.’’