Dipping into the CBeebies talent pool looking for a star who has a proven track record as a children’s favourite seems to have become something of the norm when casting pantomimes. Obvious it may be but thank goodness Little Wolf Entertainment signed up Ben Faulks for Derby Arena’s Beauty and the Beast.

The experienced entertainer, known to his legion of TV fans as Mr Bloom, lived up to his billing as one of the stars of the show as he energetically darted around the stage in the role of Idle Jacques.

His comedy catchphrase of  ‘right on track’ didn’t quite get the audience chanting every time he ran on from the sidelines, but it did sum up the refreshing changes made to the city’s annual pantomime this year.

With a new production company at the helm Derby Live’s festive show piece has certainly been revitalised. The glittering set was lavish and spectacular, as befits a huge venue like the Arena, and the razzle-dazzle costumes were fabulous.

We were always going to love Belle’s princess outfit but she was definitely eclipsed by the outrageous outfits worn by the Dame, Betty Brioche, played by Little Wolf’s co-founder Morgan Brind. They must have such fun creating such a hilarious wardrobe.

As the writer and designer of the pantomime Brind has a big role to play in the success or otherwise of the show and he revealed a remarkable talent that audiences in the city that he has made his home have never seen before. Hopefully this is just the start of a partnership that will improve further in future years.

The production team created this pantomime set in Spondon-en-le-Seine, from scratch especially for a local audience and although some of the gags and topical references felt slightly shoehorned into the script there were some corkers. A reference to Derby’s ill-fated fountain raised a definite cheer from the adults.

The all-important test is whether the children had a great night out, and as they were in stitches at the slapstick and suitably terrified by the deafening roar from the Beast I think the answer to that was a definite yes. 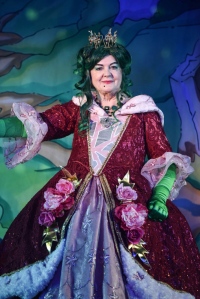 The evil Enchantress played by Derby’s own wonderful Gwen Taylor did less to scare the pants off the youngsters. I think maybe she was just a bit too nice for a baddie role. As fairy godmother she would have been perfect.

However that didn’t stop one little boy shouting loudly ‘kill her’ when the audience was asked what to do with the thwarted villain. Our Defence Secretary might like to get in touch with that young man!

The cast not already mentioned were Nathan Turner as Prince Philippe/Beast; Aston Dobson as Gaston; Thomas Bird as Le Fool; Louise Olley as Belle and Robert Traynor as Marcel.

The musicians were Tom Bond, Matt Henderson and Richard Shaw.

The pantomime can be seen at Derby Arena until December 31. For tickets go to http://www.derbylive.co.uk If you are taking your car leave in plenty of time because of possible queues.

All pictures are by Robert Day.