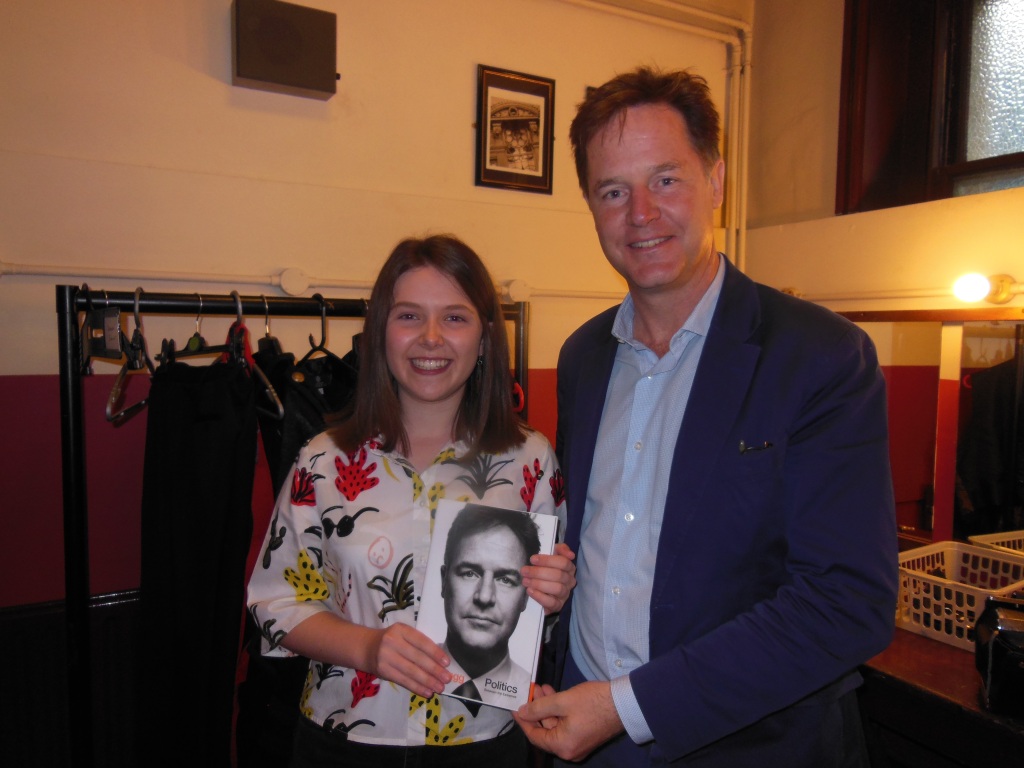 Politics student Lucy Boardman – who made three speeches in the House of Commons before she was even eligible to vote – met one of her heroes at Buxton International Festival the day before she turned 18.

Lucy caught up with former Lib Dem Leader Nick Clegg after he spoke in the Festival Literary programme about how the coalition with the Conservatives worked behind the scenes when he was Deputy Prime Minister.

She was there to get his autograph on her copy of his new book, Politics: Between the Extremes, which despite his own battering experience, makes the case for multi-party governments and pragmatic compromise.

Lucy’s own political experience began in 2014 after she was elected to represent St Thomas More School, Buxton, on the Derbyshire Youth Council, followed by winning a place as one of four Derbyshire Members of Youth Parliament (MYPs) in the UK Youth Parliament.

She was elected to represent the East Midlands in the House of Commons, proposing the Reintroduction of Maths and English Resits.

Lucy, from Whaley Bridge, also spoke for East Midlands in the Commons the following year on the lasting legacy of Magna Carta and the year after for the North West on Public Transport when she attended sixth form college in Stockport.

“I had an incredible experience and am so grateful to both UKYP and the British Youth Council for giving me such an amazing opportunity, the chance to meet some inspiring politicians such as John Bercow and Andy Burnham, and meet some incredible young people and make some wonderful friends,” said Lucy.

“In September I will be going to the University of Nottingham to study History and Politics and I hope to continue to be involved with student politics and encouraging young people to get involved with the political system and make a positive change within their local areas.”

Lucy’s interest in Nick Clegg’s career began as she watched the coalition form a government: “I always found the Lib Dems very interesting as a centre ground party.”

The youth vote has become centre stage in UK politics, believes Lucy: “Young people see something in Jeremy Corbyn, not necessarily the Labour Party but Corbyn himself, which makes them feel they would be included in politics in a way they weren’t before.

“It will be very interesting to see if that keeps up through to the next election. The other parties have also realised that the youth vote does make a huge difference, so they are putting out policies which will impact young people in a positive way.”

Mr Clegg chatted to Lucy about her experiences in Parliament, and said he hoped reading his book hadn’t put her off politics!