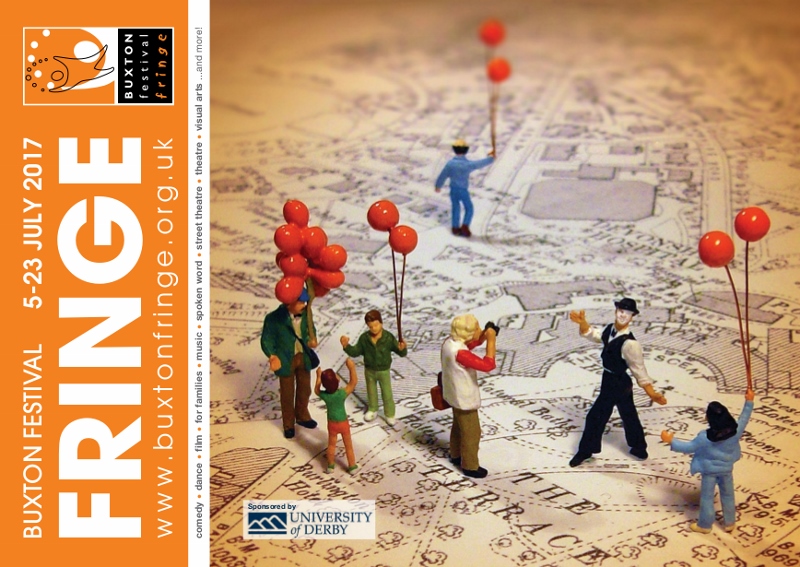 Buxton Festival Fringe is preparing for its biggest ever event, with 186 entrants having signed up for this year’s exciting schedule from July 5-23.

As always there will be an varied programme comprising substantial theatre, comedy and music sections as well as dance, film, spoken word, street theatre, film, visual arts and entertainment for families.

This year’s event coincides with World Fringe Day on July 11 so organisers are planning a series of drop-in events at the historic Pump Room, which is currently being refurbished as part of the town’s prestigious Crescent redevelopment.

Meanwhile theatre explodes across Buxton in a number of different venues.

Underground Venues has moved to The Old Clubhouse and boasts shows including Lucky Dog’s Hats Off to Laurel and Hardy; Breathe Out Theatre’s Dark Satanic and The Ladder by the award-winning Helen Rutter.

A new pop-up venue, the Rotunda, a geodesic dome which will be in the Pavilion Gardens, has a wide programme ranging from South African musical Stimela The Gumboot, to Grist to the Mill’s Call Mr Robeson drama.

Elsewhere, among others, there is Alice in Wonderland Underground in Poole’s Cavern; a one-man King Lear at the the United Reformed Church and avant-garde theatre from Jeu Jeu La Foille at the Green Man Gallery.

In smaller categories, the true variety of the Fringe becomes clear with everything from electrifying flamenco from dotdotdot dance (this time in a performance with soprano Gillian Keith) to circus-themed acrobatics in the forest from Whispering Woods.

A completely open-access festival, the Fringe does not undertake any selection or censorship, and provides a showcase for performers and artists of all kinds in a variety of venues, from a state of the art auditorium to a disused industrial fridge.

And Chelmorton, Eyam and New Mills are all getting in on the act by staging Fringe events this year.

Fringe at Five, a busking opportunity for performers; takes place at the Bandstand in the Pavilion Gardens at 5pm from July 10-22.

Many other events are free, including the new Buxton Pride Picnic and most of the visual arts section.

All free shows are listed on the website’s Fringe for Free page.

Here are some of the highlights

☻Leoe and Hyde are bringing to the festival a fearlessly caustic satire fusing the most vaunted production in the history of classical opera with one of pop culture’s most explosively tragi-comic unions: The Marriage of Kim K (this month’s artsbeat cover story).

What do Mozart and Kim Kardashian have in common? Well, Kim’s 2011 marriage to NBA star Kris Humphries began with a televised fairytale wedding and ended just 72 days later when a mysterious divorce was filed.

This epic failure of love is just one of three collapsing marriages at the centre of this brisk, hilarious and ambitious rewrite of Mozart’s Marriage of Figaro, combining pop, electronic and classical music. See it at the Pavilion Arts Centre on July 6, 13 and 18.

Recently published in print to raise funds for the Stroke Association, this allotment aphrodisiac will have your eyes watering with laughter.

There is love and lust amongst the onions, as out-of-work nightclub bouncer Vinnie Hollis attempts to recover a 17 foot prize carrot,

There are two performances on July 9 at 1pm and 5.30pm at The Lee Wood Hotel.

☻With poems and songs of the Big Bang, a blade of grass, absent friends, one particular lamppost, and a girl called Amaryllis, Mark Gwynne Jones and the PsychicBread are set to delight audiences with an all-new show.

Their performance is by turns dramatic, funny, sensitive, and romantic. Their compositions draw on a vein of poetry and music described as ‘evocative, surreal and seriously entertaining’. They will be performing at the Palace Hotel on July 16.

Through a series of off-the-wall sketches Mike tackles all the big themes in life – love, suicide, Beethoven and the Army to name but a few.

What makes this show different is that Mike doesn’t perform to the audience he performs with the audience, in the ultimate immersive TV inspired sketch show.

You can catch the action at the United Reformed Church Blue Room, from July 20-23 at 8:15pm.

☻Scrivener’s Books will play host to storytelling arts-collective, Parable Arts, with their production The Forgotten Tales – a fast-moving one-man performance breathing life into the hilarious, heroic and heart-breaking stories that were once well-known across the ancient Celtic Isles.

Parable Arts founder, Jon Buckeridge, single-handedly brings to life more than 20 unique character across a series of artfully-crafted adventures, playing multiple instruments, singing in three different languages and performing in a dizzying array of accents and attitudes. The performances on July 13 and 14 begin at 7pm.

☻Burbage Art Group’s 2017 Art Exhibition is bigger than ever this year and will run for an extra hour to allow visitors more time to appreciate the wealth of art on view.

The show is on Saturday July 15 from 11am-4pm at the Burbage Institute, Nursery Lane, Buxton and also forms part of the popular Buxton Art Trail, back this year with art in homes and studios across the town.

☻Cupid and the King: The King’s Courtesans is being brought to the festival by Mr Simpson’s Little Concert,  who love discovering the interesting bits of social history and creating performances of historically-informed music with readings.

This show explores the lusty, rancid world of English kings and their mistresses. From the gay lovers of James I to the people’s mistress, Nell Gwynne, be prepared for bawdy, no-holds-barred, language and adult content.

They will be at the United Reformed Church, Buxton on July 14,  Spring Bank Arts Centre, New Mills on July 15, and with their sister group, The Eisenach Ensemble, at Eyam Parish Church on July 16.

☻The Monks are Kevin Moore and Yazz Fetto. They think they can lay claim to being the only Christian comedy sketch group in the UK.

They have put together a new show called The All New Ten Commandments during which each of the commandments gets the comedy sketch treatment. They will be at The Old Clubhouse Buxton on July 8 and 12.

☻The Rat Pack Productions presents Nathan Cassidy: Watch This. Love Me. It’s Deep – a  one-man theatre show that combines Nathan Cassidy’s distinctive stand-up style with a real- life love story at The Old Clubhouse on July 7 and 9 at 7pm.

☻The Rotunda Theatre, a new 120-seat pop-up theatre, is one of two venues featuring entertainment on the big screen – a unique documentary-film about playwright Harold Pinter. The 90 minutes film Working with Pinter captures how the writer contributed to the rehearsal of extracts from his own plays and worked with actors.  The film, directed by Harry Burton, is launching at the festival on July 9.