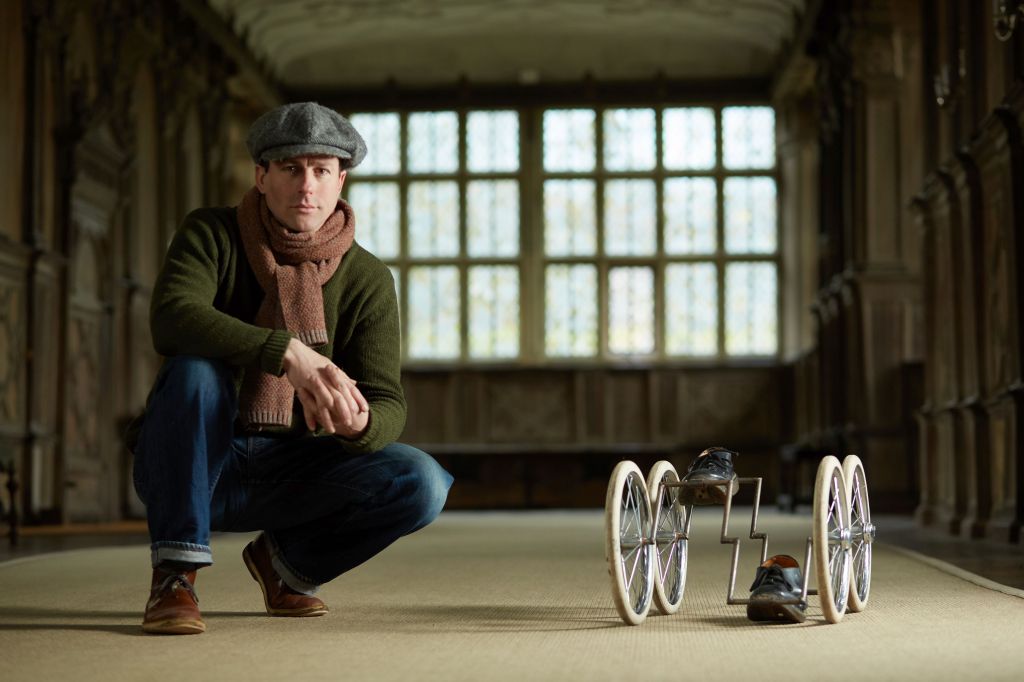 An exhibition of interactive sculptures by the highly-regarded sculptor, Nik Ramage, will open on August 1 at Haddon Hall.

Taking inspiration from the centuries of history ingrained in the hall, in the nooks and crannies of each room, the Shadows and Whispers exhibition brings together misaligned machines which celebrate the uncertain and odd and blurs the lines between past and present, inviting and encouraging visitors to seek out sculptures trying to attune to their surroundings.

One of the finest examples of a fortified medieval manor house, Haddon Hall dates from the 12th Century to the early 17th Century, whereupon it lay dormant for over two hundred years from 1700 until the 1920s, when the 9th Duke and Duchess of Rutland restored the house and gardens.

Nik Ramage has drawn on this history, assembling machines which connect elements from the contemporary with the antiquated.

Shadows and Whispers has been designed to align with the spirit of Haddon. Walking machines shall promenade the Long Gallery; a chair cut in half but still standing, has been paired with tapestry fragments burnt but not destroyed during the hall’s restoration; and a solar system orrery has been re-crafted to spin punctuation and subtly placed in the Tudor parlour, where the Tudor and Elizabethan family would have enjoyed reading.

The intention is to create pieces that delight but also ignite the visitor’s curiosity, with each sculpture encouraging the viewer to look closely at its elements and question why it has been placed in its context within the hall.

Well-established in his field, Nik Ramage focuses on using garden shed technology to make machines that have drifted away from their primary utility and objects that have forgotten their purpose.

With his roots in graphic design, Ramage’s career has included model making, theatre design, design of record sleeves and creating contraptions for television programmes. Throughout his varied career, Ramage has created and become renowned for interactive sculpture and in 2016, Sir Paul Smith hosted Ramage’s first solo show Haphazards in his Mayfair London store.

It was upon seeing Haphazards, in which over 40 machines and objects were on display; offering a new take on familiar everyday objects; creating a collection of obscure contraptions which created a cacophony of sound, that master craftsman Bill Amberg suggested Ramage meet Lord and Lady Edward Manners, to discuss the possibility of creating sculptures for an exhibition at Haddon Hall.

Nik explained; “Following my initial meeting with Lady Edward, in which we began to explore ideas for this show, I imagined people exploring Haddon, being caught up in its atmosphere but then having the additional discovery of my sculptures, tucked away into corners.

“One of the truly remarkable things about Haddon Hall is the unique view of early English life it provides – with different parts of the hall constructed over a number of centuries. I have attempted to mirror these different periods of time in my sculptures, blending the antique with contemporary and blurring the passage of time.”

Lady Edward Manners said: “Upon meeting Nik and having been shown his previous work, we immediately saw the appeal of his sculptures to both the young and the old and knew that his work would create an intriguing and mysterious show to be enjoyed at the hall.

“As part of the show’s development, we allowed Nik to take a few utilitarian objects from the 9th Duke of Rutland’s physical archive created during the restoration of the hall in the 1930s, to weave into his machines for the exhibition. These we believe shall create an even more interesting experience for our visitors and connect these 21st century creations with the 900 year history of the hall.

“Haddon Hall has a wealth of history, with craft at its very heart and these sculptures embody the real essence of our wonderful home.”

Shadows and Whispers runs from August 1 to September 30. The exhibition is included in the general admission ticket.