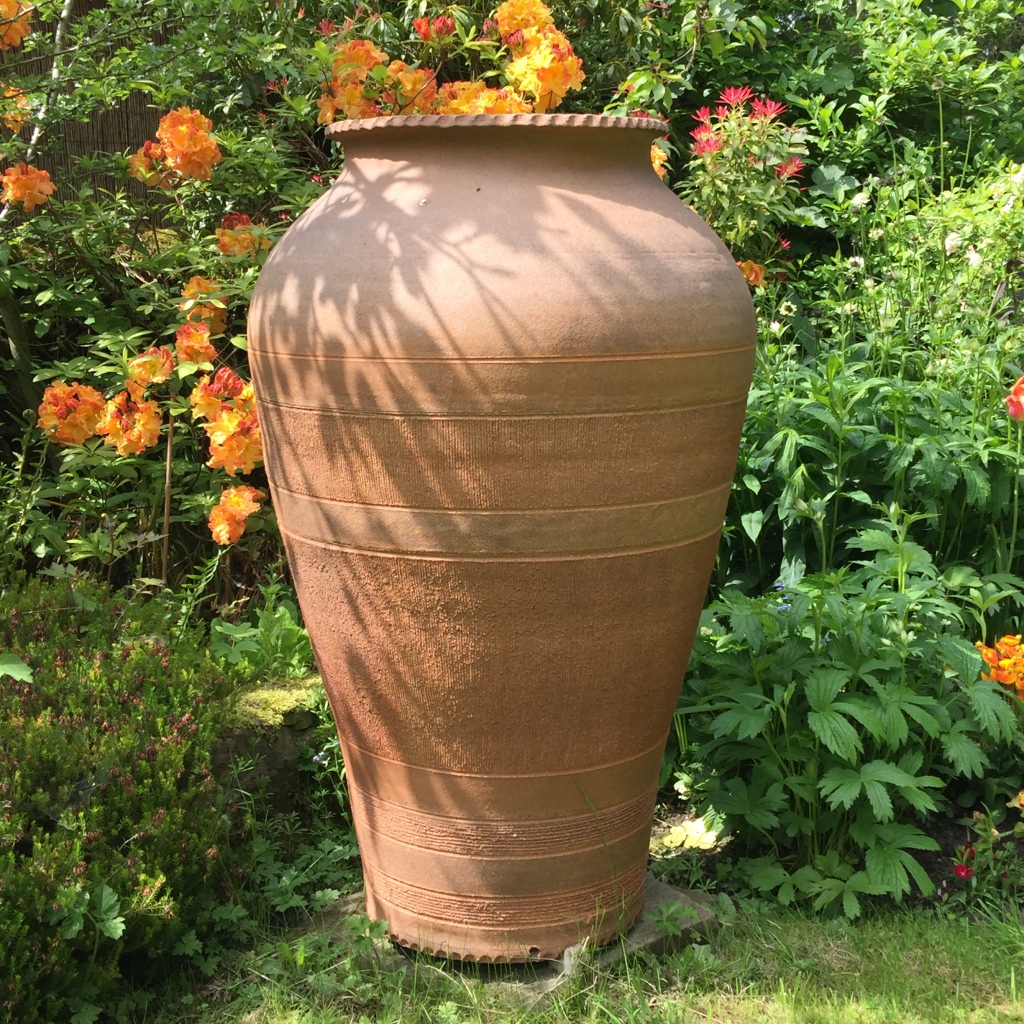 Ceramicist Ray Gridley says he is a man who doesn’t like “just dabbling” at anything. If he is going to do something he wants to do it properly.

If you go along to his studio at Baslow and see the size of his wood-burning kiln you will appreciate just what I mean. It is vast, and during the four times a year that he fires it the chimney looks like a red hot rocket launcher shooting flames into the sky.

The reason for the large kiln is that one of Ray’s distinctive designs is garden pots which can be anything up to four feet tall.

These pots will be the stars of the show on the Baslow Pottery stand at RHS Chatsworth Flower Show.

With the stately home on his doorstep it seemed fitting for Ray to have a presence at the flower show and he is hoping his beautiful giant pots will be popular with showgoers.

Ray, 73, only discovered his passion for pottery in his 40s, until then he had enjoyed a colourful career – as a United Nations diplomat when first out of university, working for the charity Shelter and than as a director with Sheffield City Council.

“I only started working with clay because my son wanted to do pottery classes. I used to drive him there and then spend a couple of hours sitting outside waiting for him to finish. I thought this is no way to spend a Saturday morning so I asked the potter Norman Cherry if I could join in.

“I was immediately captivated by the possibilities it had and wanted to learn more and do it properly. I went on other courses to learn about glazes and firing and to improve my throwing style. I don’t like just dabbling and wanted to know all there was to know about it.

“The first pot I ever made was the biggest the kiln available at the classes would hold, and I suppose I still have that urge to make pots as big as I can,” he explained.

He and his wife Doreen moved to Baslow almost ten years ago so that he could build his massive kiln and he says that having the gallery has been the making of him as a potter.

“I have the freedom to make and sell whatever takes my fancy and it is great fun.”

The kiln has a 50 cubic feet capacity and once it is lit each firing takes about 30 hours at temperatures as high as 1,250C. He relies on a team of helpers to keep stoking the fire with recycled timber through the night – sometimes every two minutes.

When they were digging the foundations for the kiln Ray also discovered his own supply of Baslow clay which he uses to fire unique vases and bowls.

“I have about three tonnes of the clay dug out and I am slowly processing it for throwing.

“The clay comes out a smooth charcoal grey and is quite different from other clay I use.

“I will be taking a selection of pots from the clay to the show with me as well.”

For more details about Ray’s work and the gallery go to http://www.baslowpottery.co.uk